History is a Strange Animal

SOMETIMES things happen for a reason.  Sometimes we are never really sure what the reason was.    In 1976, a relatively new resident of Benzie County found herself living in a community void of musical opportunities and experiencing withdrawal symptoms. She had grown up in a rich musical heritage in the Upper Peninsula playing in city bands several nights a week, in addition to college bands, the symphony and a jazz band all at the same time.   Beyond singing in or directing a church choir, there were no other musical opportunities for adults in her new home.  There was no community band, symphony orchestra or choral group.

That fall, as director of her church choir, Carolyn Lalas approached the pastor Melvin Bricker and suggested that it might be interesting to write a few letters to other church choirs and singers to see if there might be an interest in doing a combined Christmas Concert.  And that was the unplanned beginning for whatever the reason.

Sunday afternoons as this group of about 25 strangers gathered for rehearsals, they soon realized what a good time they were having, and before long asked the question “Why do we have to stop after the concert?”   Nobody at the time had a good reason, so the group continued gathering on Sunday afternoons for a spring concert, and then Christmas and then spring and then Christmas.  There was a pattern in the works.

Following the initial Christmas Concert, individuals felt that the group needed a name.  Much discussion took place, and there was some real substance to the discussion.  Basically they had initially gathered as strangers. At that time Benzie County was made up of several small communities which generally looked at each other as rivals, if for no other reason than the fact that there were two school districts, each with strong athletic programs, and that was reason enough.  However that was not the only underlying current that weaved from border to border, and because of that these individuals wanted to be known as the Benzie Community Chorus, with the emphasis on Community.

In the early years of existence concerts were given in various churches around the community, once again emphasizing the concept of community no matter the size of the church.  The Congregational Summer Assembly, a summer community on Crystal Lake near Frankfort, with a strong musical heritage and a beautiful meeting house, opened its doors for BCC performances in the summer.

It was not to very long before Lalas started dreaming again and accompanist Mary Ellen Wagner hopped on board.  “Wouldn’t it be fun to do some musical dinner theater,” was the presentation to the chorus members on a Sunday evening.  The response that followed went something like “Who would pay to hear us sing.”  And with that the CABARET season was born.

After about five years of rehearsing in the sanctuary of the Methodist Church of Frankfort during the afternoon, rehearsals were moved to Sunday evenings as well as to St. Phillips Episcopal Church of Beulah.  In addition they became three hour rehearsals.  St. Phillips continues to be home to the BCC.

After the first year of what would become known simply as CABARET, it was evident that somebody had struck a good chord. Music was from the sounds of Broadway, current and past, as well as the Big Band Era.  Shows, at the Sail Inn of Benzonia, were sold out each night, and the season was expanded to 12-15 nights spread across May and July.  During this time invitations were accepted to sing out of town, for a state convention at the Park Place of Traverse City, and Matheson Greens Golf Resort in Leelanau County, as well as for community events in Benzie County.

Never one to become complacent, the dreams started again after a few years, and in 1992 it was to go abroad for two weeks.  By now chorus members had become accustomed to dreaming, and after listening decided it wasn’t a just a pipedream – it was possible.  Over the next 10 – 15 years five performance tours of Europe and Great Britain, interspersed with Good Will Tours throughout Michigan and the eastern portion of the United States were taken.

When the concept of the initial tour became known to the Community of Benzie, the community as a whole stepped forward to make it happen financially.  Ever after,  whether it has been a tour of eight countries of Europe, North Carolina, Michigan or Pennsylvania, each tour has been a Goodwill Tour.  Funds were raised for scholarships in some places, Save the Children’s Fund in England, a church roof in another English village etc.

Along the way the Benzie Community Chorus became much more than a singing ensemble of note.  The members consider themselves as a family.  From the first gathering of about 25 individuals, membership has varied depending upon the season to as many as 75, and over its lifetime has been a voice for over 350 singers. 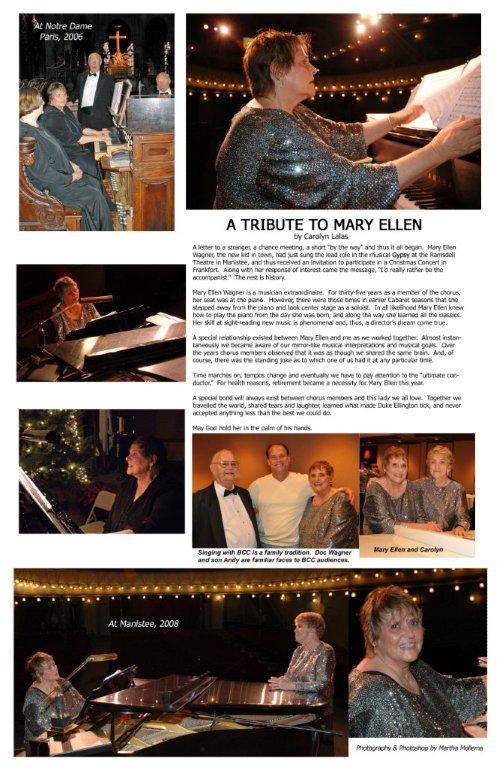